Adding a row from an app with =Filter

So, I have created my first app in Honeycode and I only have one significant issue. I have two columns in my projects table with Filters that reference my task table and my formula works in the table view.
When I use my app to add a row to the project table the two filter columns return "#NAME?" instead of the filter.

I went to the "Done" button on my app and updated the automation with my filter formula from the table view pointed the formula at the proper column and selected the "Write as Formula" Option and I still get "#NAME?" in my table. I tried deleting the two formulas from the automation and I get "#Name?"

I tried putting quotes around the entire formula and writing it as a value.

The only way I have had success was to write an automation that looks at the projects table filtered columns overwrites the "#Name?" with the working formula.

Is there some change I need to make to my formula for the app automation to work?

In an automation, you need to specify the row or rows for a given action. A FILTER formula contains multiple rows and would be used in the Run Options of the automation, which specifies the criteria of rows that you wish to run the action for.

So depending on the goals of your automation, you would either put the FILTER formula in the Run Options to do an action for each row in that filter, or if you only need the action on a single row, you would specify a particular row (Such as with FINDROW()).

Let me know if that helps, and if you have any other questions on this.

It sounds like you are trying to write the filter formula itself into the column - you should be able to take data from =FILTER(your filter formula) and write to your column (see example screenshot):

If you're getting "#NAME" errors, there might be something wrong with the actual filter formula. There could also be an issue if you are trying to reference variables or previous values from the automation inside your filter formula.

Could you share more detail about the formula you are trying to set in the automation?

Alternatively, if you know the filter formula in those columns will be the same for each row, then you can format your table column and set a column-level formula - then you won't need to add that column into your automation since it will automatically be formatted as your column-level formula. (see below) 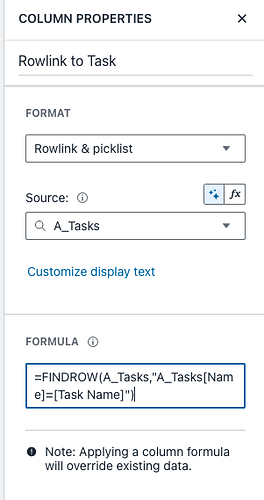