Honeycode has helped my team adjust to operating virtually, and today I’d like to share my story. I work in Human Resources (HR), and I noticed numerous belated birthday and work anniversary wishes, and realized we needed a tool to solve this problem. I quickly did the math and discovered with a team of 15 people, it’s possible that 30 milestones could be missed yearly. Why not flip that, and instead, we have 30 opportunities to create meaningful experiences, and improve team building while we’re at it. Using Honeycode, I built an app to notify managers of their direct reports’ birthdays and work anniversaries without any coding experience required.

We had stored our birthdays in a shared document, but it was inactive and you’d have to remember to check in order to actually remember a co-worker’s milestone the day of. This led to lower morale for the team, as these important milestones were either missed or remembered at a much later date. Additionally, it didn’t create team building opportunities to share in celebration, which was quite key in our newly virtual environment due to the pandemic. My vision for solving this problem was to create a way to make the dormant birthday list active, and have birthdays and anniversaries proactively sent to the team to allow for proper celebration of these important life and work milestones. Honeycode had just launched at the time, and I decided my best option would be to create an app to ensure managers never missed their teams’ upcoming birthdays and anniversaries.

I wanted my app to be automated, which could work in the background and scan a table of birthdays and work anniversaries, and then to alert the manager via email when there was an upcoming milestone for an employee. Another thing that was important to me was to ensure low upkeep. For example, the only update to the app would be if someone left or joined the manager’s team.

Honeycode allowed me to bring an idea to life, as I wouldn’t have had the capacity to create something on my own since I don’t have a coding background. I want to also note that birthday and anniversary recognition has doubled since we launched this app, which is a huge success. Overall, the experience was smooth and any roadblocks I encountered were easily resolved with the great Help & Community guides for Honeycode.

If you’re looking for info on how to build this app, read further on.

I ended up creating an automation trigger, which would email the manager 3-days before the anniversary or birthday of the employee. My thinking was to allow ample time for the manager to prepare any sort of message or recognition for their team member.

Note: Due to confidentiality, I removed data from my app and used mock data to give you an overview.

Creating the Tables: Anniversaries and Birthdays

My first step was to create the tables to track the birthdays and anniversaries. I created these two separate tables of data using the Table function within Honeycode. The first table is for anniversaries with columns for Name/Anniversary Date/Year Hired. This allowed me to set up a notification utilizing the Automation function of Honeycode, which could be sent out on the anniversary date, as well as calculate how many years the employee has been with the company. 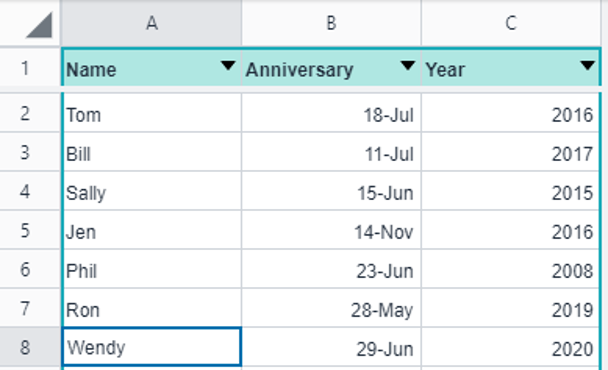 The second table I created was for birthdays, which includes Name and Birthday. 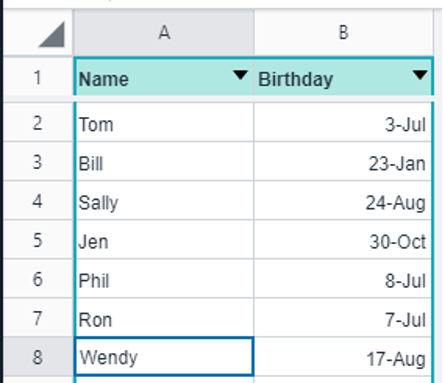 For the next step, I needed to automate the email notification sent to the manager based on specific triggers. I used the Automations function to set when the notification would be sent. As you can see in the picture below, I set the notification trigger to send 3-days before every Anniversary or Birthday. 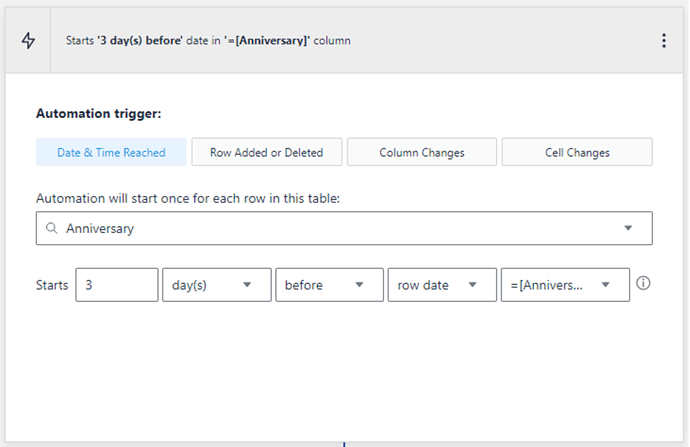 Finally, I had to create the message and automate what was sent to the manager. As seen in the example below, I had it pull the three main points of information the manager would need, while also adding a formula to subtract the hire year from the current year to highlight how many years the employee has been with the company. This completed the app building process, and worked seamlessly with sending the milestone announcements to the manager. 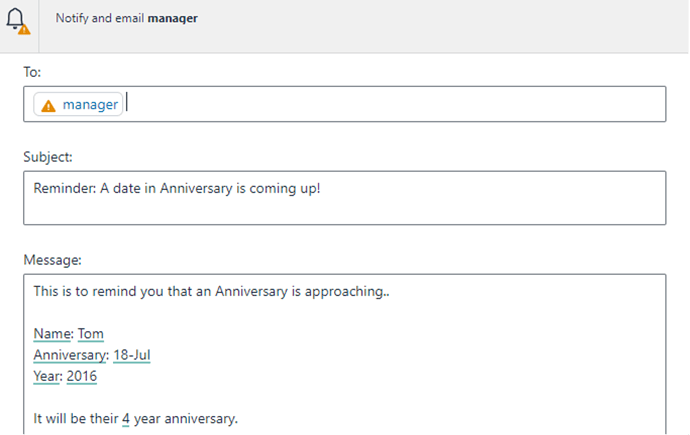 I’m already visualizing how we can iterate on our Honeycode app in the future. One idea I have is creating an automation that’ll send a personalized email from the manager to the employee on the date of their anniversary, but that’s for another day. I will say though, it was great to be able to build an app from scratch without needing a coding background, and see first-hand how it helps managers recognize their employees’ milestones throughout the year. In addition, creating these moments of delight has been incredibly impactful, as the app has improved morale since we get to celebrate our team members on their actual birthday or anniversary date.

Not yet a Honeycode Customer? Sign up for our free version here.