How to build master-detail screens from scratch

What am I missing here???
I have 1 table named 'members'
If I create an app using the wizard I can create a detailed member's screen plus a member form. I see that clicking on a member navigates to the member details screen using the 'thisrow()' and the =$[InputRow] variables. Works like a charm.

Now...I'm trying to understand all of the mechanics of passing information from the primary screen to a secondary screen for both the purposes of the master-detail screen navigation and other screens where information would be selected from a parent screen to another screen that is related by primary keys.

If I create my own screens for members and member details I do not have access to the 'thisrow()' and =$[InputRow] variables. What gives? What am I missing?

In the member details screen, I cannot set the source to anything. The error message indicates that 'specifies the table row that will be specified using something like =FindRow(table). Unfortunately, it doesn't seem to allow me to enter anything into the 'set source' input prompt.

Any references to documentation or hints or?? would be appreciated.

Here's a step-by-step guide to set up Members and Member details screens from scratch. As far as I can tell there isn't any detailed documentation on this yet.

Step 1: Create a list of members on your Members screen
I assume you've already done this.

The important thing is to change the data cell type from the default Shared to Variable. This is done within the DATA CELL PROPERTIES section that you can access by selecting the data cell. 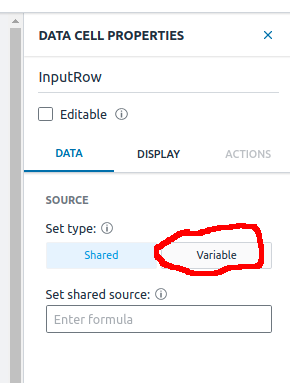 Click the Variable button circled in the screenshot to change the type from Shared.

This is the ACTIONS tab. 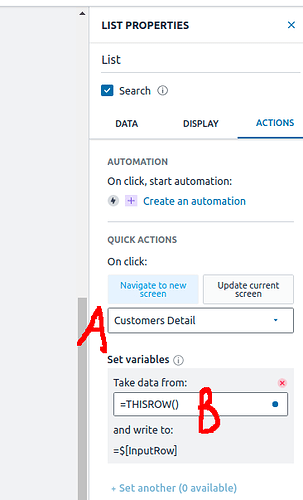 The dropdown list at "A" allows you to choose which screen to switch to when a member in the list is clicked on by the user. In your case, you will want to select the Member details screen here if it's not already selected for you.

We've only created one Variable type data cell on the Member details screen, so we will only have the option of setting one variable. Click on the blue text "Set variable (1 available)" and then click "$[InputRow]" to open the box labeled "B" in the screenshot. The "=THISROW()" formula will be automatically filled for you. Don't change it.

Thanks for your question, and thanks to @Isaiah for the detailed answer.

Let me describe the concepts behind parameter passing between screens.

Let's say you have a FROM screen and a TO screen.

In the TO screen, you define one ore more Variables to receive the parameter. Most often you pass a Rowlink (i.e. the row you intend to display on the TO screen), but you are not limited to Rowlinks - you can pass any variable(s). If you are passing a Rowlink, you can then use this Variable as a Source for a Block to allow edit or display of a record. If you pass any other variable, you can use that in a Filter expression or any other way.

In the FROM screen, you can pass one or more variables using the Navigation Action. If the navigation is from a List, then you can use =THISROW() since this refers to the current row you are navigating from. If on the other hand you do not have a list, and you want to pass a Rowlink, then you have to somehow figure out how to get the rowlink and then pass it. You can also pass any other variable to the TO screen, and you can even pass a value, that you can then use to find the row as well. 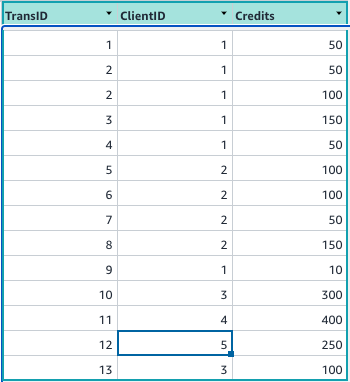 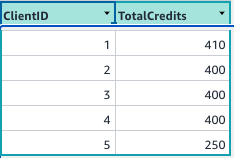 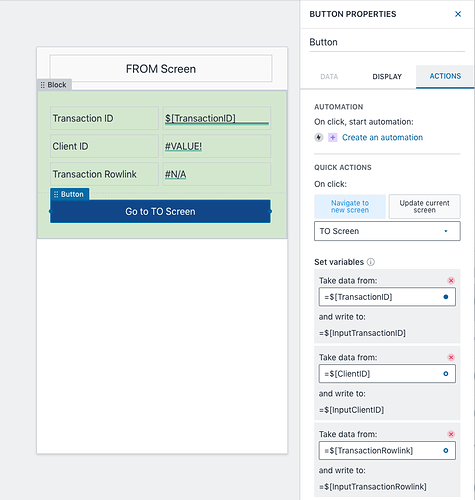 Here is how the TO screen looks like. There are three blocks displayed below the blue block, each using the Input variable parameter to determine its source: 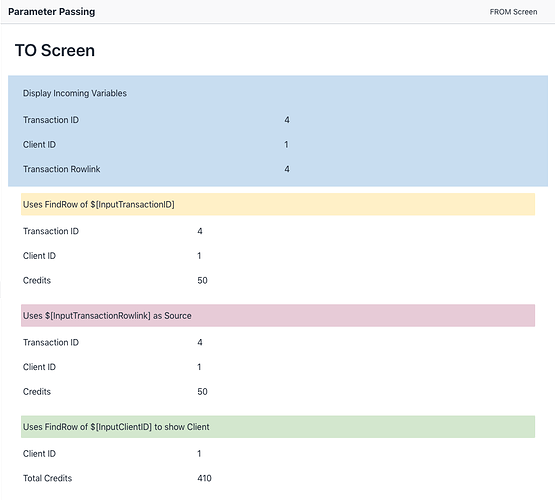 This block displays the values of the incoming variables value: 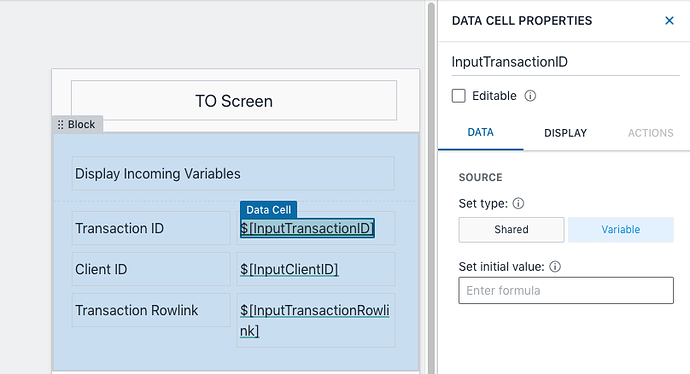 First block displays the Transaction record using the InputTransactionID in a FindRow() function:

Third block displays the Clients record using the ClientID in a FindRow() function:

Thanks very much for the response. I've tried out your solution and it works as prescribed. Much appreciated.
My problem stems from confusing other system variables that have the format of $[----]. Once recognizing that format I thought that the $[InputRow] was a system variable to use rather than a variable that was user-defined.
I see the light....

Thanks for your information and prompt response.
Roy Mac