Is there a way to create a type of simple kanban board. My idea would be to use editable column lists side by side and then filter each list be a column. Changing that column value would move the row to a different swim lane on the board.

Is there a way to have multiple editable column rows on the same page in web mode. On mobile mode it would be probably better for you to only show 1 column and then swiping left or right changes the column?

Any suggestions welcome on how to achieve this.

Nice idea! I understand what you're looking to do.

As of now, you cannot drag and drop rows or column data in a list during run-time, however that's a great feature request I'm happy to pass along to the team.

For an idea of how to build this functionality in Honeycode, you could create buttons that move values into the next column. I made a simple app, which has a list with editable fields and buttons that indicate which column the value will move into:

To do this, create a table with different columns (or "lanes"), and in Builder, create a list from that table and make each field editable:

Then create buttons (I just pasted an arrow emoji on them), and for the button's automation, create an "Overwrite" action which updates the current row to write the value to the next column and then remove the value (or write "") to the current column: 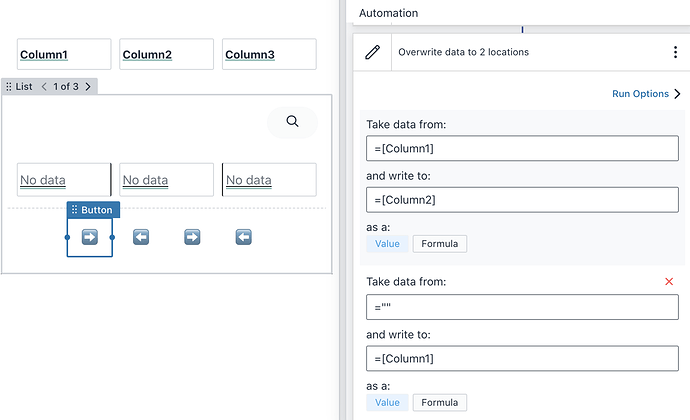 You can apply this concept to each button's automation accordingly.

Hope this idea helps! I know it's not as ideal as dragging and dropping values, but know that idea has been suggested to us before and is being reviewed by our team.

Let us know if you have any other questions.

This topic was automatically closed after 10 days. New replies are no longer allowed.