In the approval request template have a condition that changes the approver if the amount is over $500. Currently it is...
Take data from
=findrow(M_Projects,"M_Projects[Project]=%","CFO")
And write to:
=A_POs[Project]
It works, in the sense that it puts the CFO's name in the Project field, but it doesn't actually link it to the user correctly. It just plugs in their name

Is there a command that will link the user instead of just their name?

Can you share more screenshots (including column headers) of the M_Projects and A_POs tables?

At first glance, it looks like the first column of the M_Projects table contains plain text of the names? If so, the fix is to format that column as a contact, and then change the names to contacts.

Absolutely. Thank you Andrew. Here are some screenshots...
Approver table 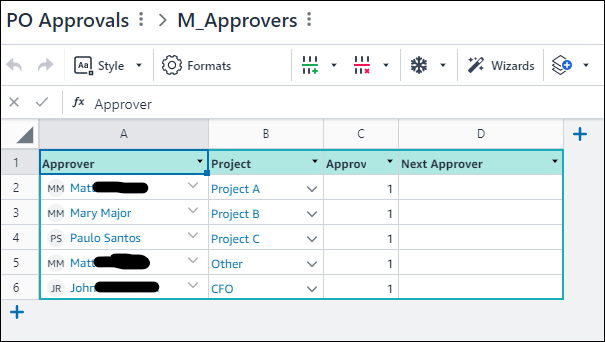 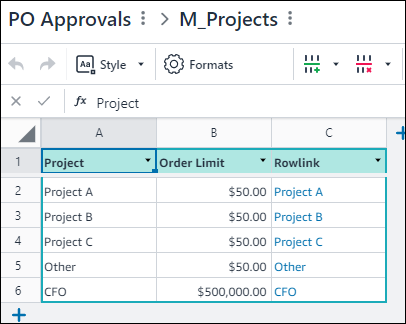 What table does M_Projects[rowlink] link to? Can I see that one? 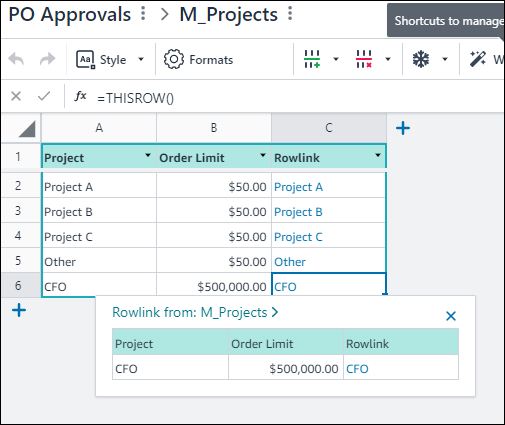 I can't figure how this formula was dropping "John Doe" into that column in your first screenshot.

Looking at these tables, it should have been going the m_projects table, finding this row...

If the Approver for a project is always the same, if ProjectA is always approved by Matt, which is what it seems like in your tables... then I think the Approver column doesn't actually need to be updated by an automation.

Just apply a formula to the Approver column in A_POs..

So... How this works. The project column of a_pos is currently holding a rowlink from the m_projects table. thisrow()[project] returns that whole row...

The find row formula then looks through the m_approvers table...

looking for a row that contains a rowlink to of "CFO" row.

to 2nd row of the approvers column just to see how it would react and it seemed to pull the correct info....

If you want it to drop in the contact instead, then just tweak the formula a bit.

Woot! Woot! That did it! Thank you so much AndrewB!
I'm definitely a newby at all of this now, but I hope to become a pro at it. Thank you very much for helping me get one step closer!

Woot! NP! It's tricky to keep track of the rowlinks, but as you'll be able to see, they're super powerful, and quite different from other lo-code builders out there.