I've created Groups in AWS SSO which include my users. I'm using multiple groups and want to filter data based on a user's group membership, or just by group. I would like to do this using AWS SSO groups so I can have user assignment done by our help desk in AWS SSO rather than building additional group functionality in Honeycode.

I've found that there are some system variables
=$[SYS_USER], with the following keys: [First Name], [Last Name], and [Email] as well as
=$[SYS_USER_GROUPS], which I believe maps to a logged in users AWS SSO group. I have not found if SYS_USER_GROUPS has keys or not. However, when you use =$[SYS_USER_GROUPS] it appears (I'm guessing) to show the count of groups the user is in (see image). Is SYS_USER_GROUPS an array? If so how do I access the elements? 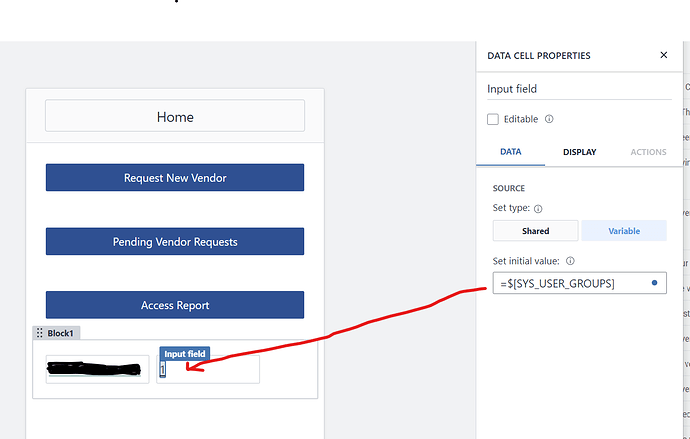 I've hit a roadblock on how to do this. How can I go about filtering my data based on membership in an AWS SSO group?

Hi Matt, welcome to the community! I'm happy to help

$[SYS_USER_GROUPS] contains which SSO groups a user belongs to, and you can specify a particular group by referring to [Name].

For an example, this can be used to hide or show content on a screen based on the user's group membership, by setting the visibility of an object to check if the user is in a group:
=FINDROW($[SYS_USER_GROUPS], "$[SYS_USER_GROUPS][Name] = %", "Group A")>0

You can also display a user's groups with a list object, by setting the source to $[SYS_USER_GROUPS] and calling [Name]:

Hope this helps! Let us know if you have any other questions.

Thanks, that is very helpful!