Want to make your apps more dynamic and responsive to your team’s needs? Help your team get things done, from data updates to notifications, all from your apps.

Apps actions and automations can accomplish the same end goals as table automations—the biggest difference is that they’re triggered by app users instead of deadlines or table data. In Honeycode these actions can:

App users trigger actions with mouse clicks on web and taps on mobile apps. App actions can be configured for the following objects:

Use this anytime you want app users to go from one screen to another.

Builder's tip: The “Actions” tab is organized in two sections: “Automations” are custom automations you can build from scratch. “Quick Actions” are common app-focused actions like navigating between or updating screens.

Use this when you want a screen to display data specific to the app user and their actions.

Another scenario is if you want to let app users cycle through a series of detail screens. You can use the variable $[InputRow] to display a different table row’s data.

Builder's tip: This button is enabled only if there are variable data cells on the current screen. 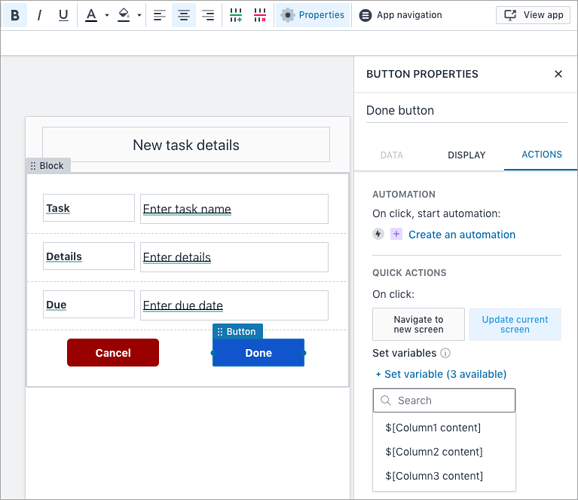 Use this when you want app users to trigger more complex behaviors, including updating data and sending email notifications and in-app notifications. See Triggers & Actions to learn more. 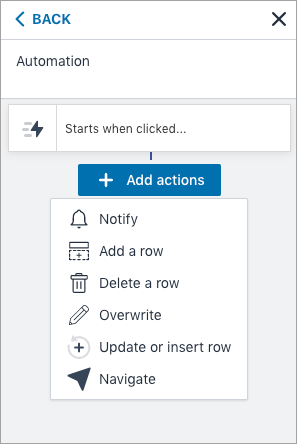 Builder's tip: You can add multiple actions to your automation.

How to update a series of rows on Done Button click from a form
How can I show only limited rows of table on app screen?
Automation Trigger based on last row
Overwriting Cell Data with data column that is not editable
Oleg closed August 5, 2020, 7:02pm #2