Does anyone know how to move the filter/sort button?

I want to move it to where I've highlighted:

Hi @Chri-3cc7, welcome to the community!

As of now, the filter and sort button on a list cannot be moved, however I'll pass this along to our team as an improvement request.

For an idea that may help in the meantime, you could create selection fields that dynamically update the list. This would allow you to place and organize where some controls are on the screen, and you can still use the built-in feature to further filter or sort.

To set this up, create a screen variable formatted as a rowlink to a table (I set one up to be a rowlink to a "Categories" table), and filter the list to that variable (See the formula I added in the source): 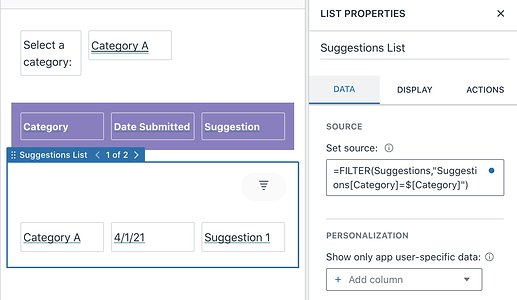 This is how the app would look:

And if a user wants to sort the list further, they could click on the filter and sort icon: 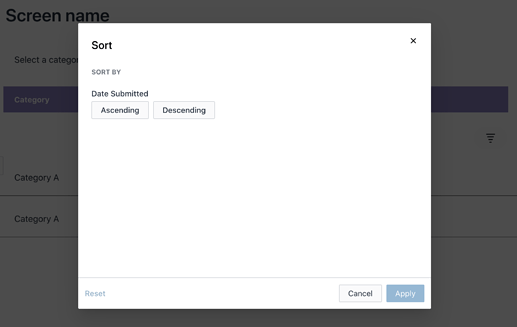 Let us know if we can help any further!

In order for that variable to be filtered on, am I right in saying that the variable has to be in the first column of the table that's being pointed to?

Is there a way to filter on another column other than the first one of the table?

For your question, you can filter by any column of a table (it doesn't need to be the first one).

To specify a column in your FILTER formula in the example above, the structure would be:
=FILTER(TableName, "TableName[ColumnName]=$[ScreenVariableName]")

The filter and sort feature under the display tab in the properties of the list also lets you select any column of that table.

Hope this helps, and let us know if you have any other questions.