Amazon Honeycode, a fully-managed AWS service, gives you the power to build powerful mobile & web applications, to manage your team’s workflow, without writing any code.

Our Amazon Honeycode team decided to create a quarterly "Extra Mile" award to recognize people who did great things outside of their regular job responsibilities. Of course, we first had to define the award criteria and how the winners would be recognized - that's unique to every team and after a few days, we had agreed on the plan.

But then we faced the challenge every group faces with awards: How to explain the award criteria to the team, get qualified nominations, gather the nominations into a list, vote, and, finally, publish the results?

The typical solution would’ve been asking for email nominations, followed by finding someone to sort through them to ensure they met the award criteria and contained enough information to explain the accomplishment, prepare a list for review, figure out a way to gather votes to select the winners, and then publish a list of the winners. And of course we needed to do this every quarter.

So we asked ourselves: Could all of this be handled automatically using Honeycode? The answer was "Yes," and we created a couple of Honeycode apps that we’ve been using for several quarters now.

Explaining the Award and Getting Nominations

Starting with the prebuilt Simple Survey App Template, we created an app for everyone in the team to use for nominating award winners. We used the first screen (Screen 1 below) to explain the award and criteria as well link to screens with examples (and this is where we also link to a screen showing past winners). 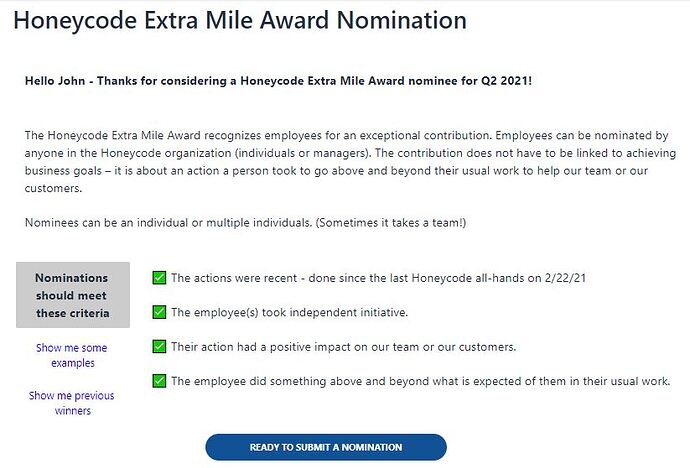 Screen 1: Opening screen in the award nomination app that explains the award and criteria, as well as providing links to screens with examples and past winners.

Clicking the "Ready to Submit a Nomination" button shows the actual Nomination screen. (See Screen 2 below). We use this screen to verify the nomination meets the award criteria by having the nominator check off each of the award criteria. Only after each of the criteria has been checked, we show the full screen that asks for the rest of the information (see Screen 3 below). 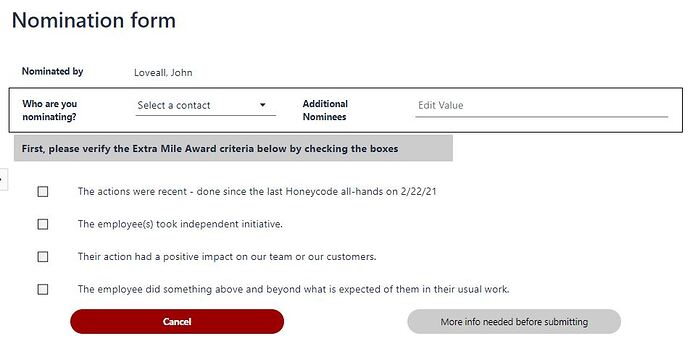 Screen 2: Nomination screen part 1 asking for the award criteria to be checked off. 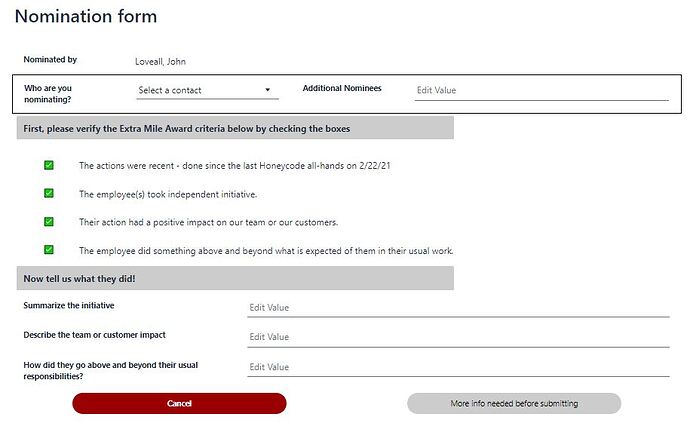 Screen 3: Full nomination screen shown after award criteria are checked off. The screen checks that all the required information is entered before allowing the submission to be completed.

Using these screens solved the problem of making sure everyone understood the award criteria and provided all the information we needed to vote and publish the awards.

We created a separate app in the same Honeycode workbook to handle voting. The voting app is only shared with the voters (who in our case is a team of our senior leadership and volunteer team representatives). To enable an on-line voting experience, the initial voting app screen shows all the nominations and allows the voter to add any comments they want to share with the other voters, e.g., "This had a huge impact!", or "I think this nomination misses one of the award criteria because…" (see Screen 4 below.) 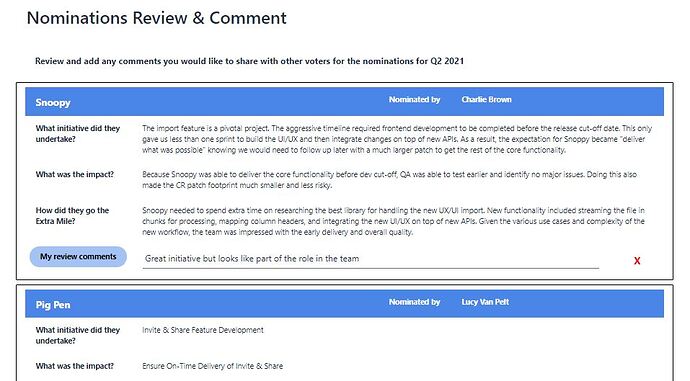 Screen 4: Voters review nominations and optionally add comments for other voters to consider.

The next screen is where the actual voting takes place. It shows each of the nominations along with any comments entered by the voting team. We set this up to give each voter a fixed number of votes. The app shows the votes remaining and lets the voter change their votes using buttons that are made visible depending on their current selections (see Screen 5 below.) Notice that we added a "One Line View" button, which displays an alternate format of the list with the nominee name, a short description, and the current vote setting - very handy when doing a final check after you've reviewed all of the input. 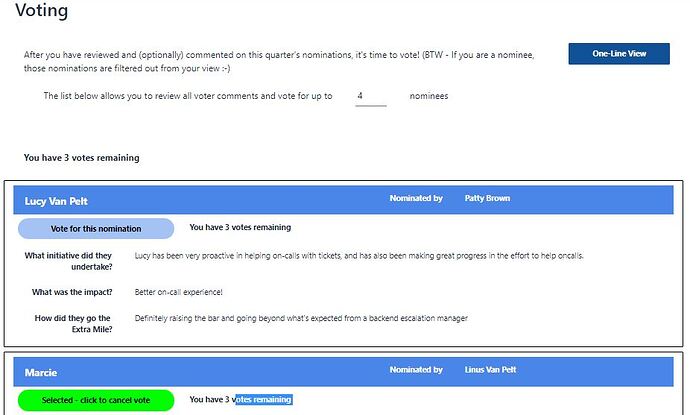 Screen 5: Voters enter their votes, reviewing the nomination and any voter comments. Each has a fixed number of votes to distribute.

Finally, the Voting Results screen shows the nominations in order of total votes, highest to lowest (see Screen 6 below.) We use this screen to decide how many awards to give. A subset of the voters are shown the button to mark the winners. When these are selected, the nominations are updated as winners and will now be displayed in the winners list. (We set up the app to only show the new winners starting after the end of our next all-hands meeting, using a table of meeting dates/times and comparing the dates). 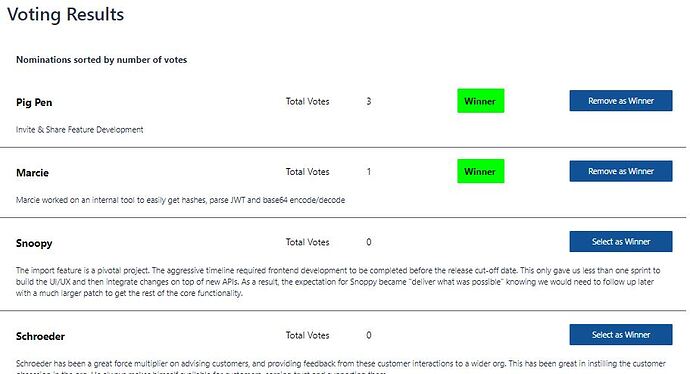 Screen 6: Votes are tallied and nominations are shown in order of total votes received. A subset of the team is given access to buttons that select the winners. All are shown the "Winner" results as they are selected.

We've been using these awards apps for a few quarters and they've allowed us to:

The only other step is to send an announcement each quarter to remind everyone to make their nominations. We'll likely automate that step soon by having Honeycode automatically send a notification to the full team the week before the next all-hands meeting. That's a great feature of Honeycode - we can easily make changes when we have new ideas or get feedback.

Not yet a Honeycode Customer? Sign up for our free version here.

I created something similar using MS Access for Josten, the ring company.