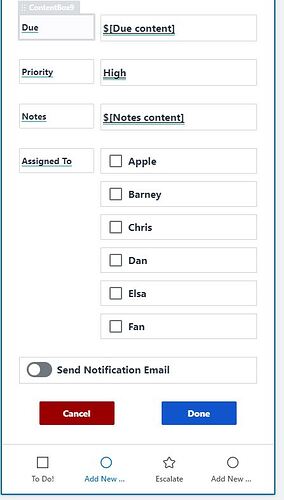 Hi @KimF-06f3, welcome to the community and thanks for posting!

For this, I would recommend using a picklist instead of checkboxes, as that would allow you to add new assignees to a table (rather than also having to create a new checkbox and update the associated formulas on the screen).

Then, you'll have different options of flows from there. For example, you could create a button that allows you to add another user (i.e. shows another field to assign a second user, etc.). Or you could have the submit button ask if you'd like to submit and clear the form or leave the same details to then assign the same task to another user. Just ideas!

For another idea, if you have a consistent group of users that you'll assign the same task across, perhaps you could add another column in a People or User table which groups assignees together. Then you could have a picklist of groups (rather than individual users), and run an automation that gives that task to a particular group (by filtering for that group in the run options).

Hope these ideas helps! Let us know if we can assist further.

Thank you for your quick response! sounds like a great idea that I will keep in mind for future version/reference. From there though, I'm having issues how I can notify via email the selected individuals? How do I do these?

For your set up, you would create an automation step for each user that checks if both the user's name is checked and the toggle is on (that they are both TRUE) in the run options: 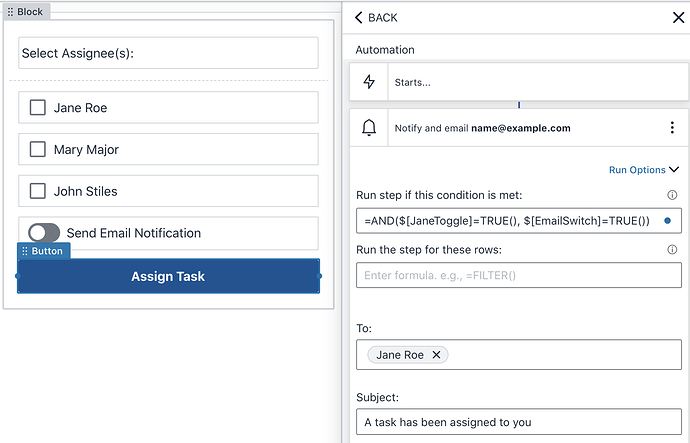 If you don't have a large team or list of users, this may be ok to maintain; However if you have many users or wish to add more users in the future, we recommend one of the picklist ideas suggested above, since that would only require an automation step for the selected user field (versus creating an automation step for each user).

Let me know if that helps!

Thank you! I will work on this and get back to you!

Hi Alyssa, thank you for your help! It did work.

Now, when I tried your approach of a picklist, I can't seem to figure out the automation step for the selected user field for multiple users. I'm not sure where to configure the button so it would add another ""assigned to user"

Yes, I can show you two concepts that may be more scalable for you:

1 ) For the picklist idea, you could have one field to select a user, and two separate buttons: one that stays on the screen with the same entered info (to assign the task to another user), and another button that assigns the task and navigates away from the form. 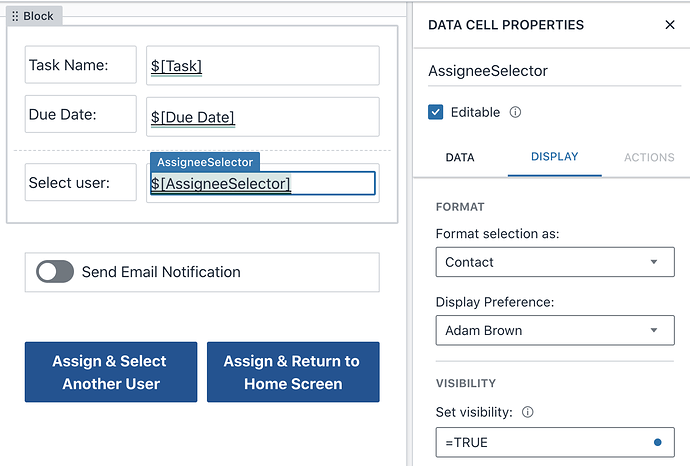 The first button only has three automation steps: one that writes a new row to the tasks table with the assignee's data, another that sends a notify email automation (which has the if toggle is true in the run options), and a "Navigate/ Update current screen" automation. In the last step, you can reset the assignee selector variable to be blank by writing "":

The second button also only has three steps, the same first two steps as the other button (adding a new row and sending email notification), and the last "Navigate / Update Screen" automation would navigate away from the form to the Home screen (or desired screen).

2 ) For the group idea, you could assign a tasks to all users that you've put into a particular group. This is how it would look:

You have a table of Groups and column in your People table that is a rowlink to the group table. 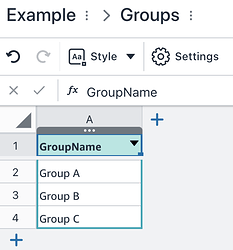 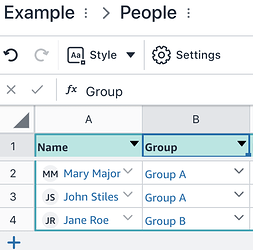 Then in your app, you'd set up a field to select a group (rowlink to the groups table). Then in the button's run options, you have a FILTER formula which will run the automation of assigning the task to each user in that group. 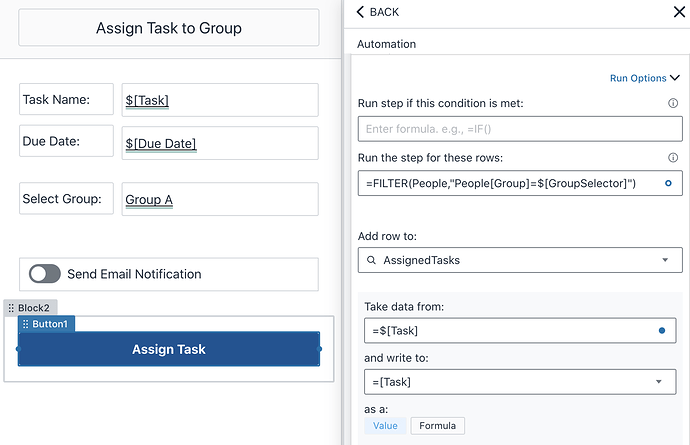 I'll note that since the FILTER is referencing the People table, you would write the contact value in the "Name" column to the Assignee (or whichever column name you have with that data). 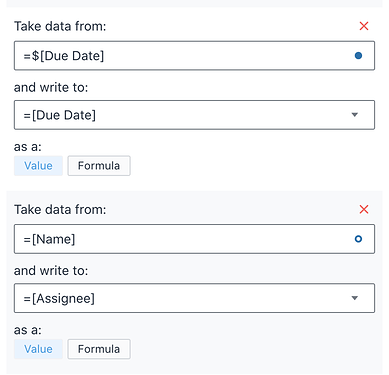 And this is what writes to the Tasks table (each user assigned to Group A):

Hope those ideas help too! Just different ways to approach it.